Pics of Yao, wife and daughter at ice skating show

Late last week Yao attended the “Artistry on Ice” show in Shanghai, which featured some of the top figure skaters in the world. This was Yao’s third consecutive year to attend the show, and he came with his wife Ye Li, actor and friend Deng Chao, and his daughter Amy (pictured at the bottom right). This was the first time that Amy had been seen in public with his parents since Yao’s retirement from the NBA two years ago. She is growing up fast!

After the show, Yao went backstage to meet some of the skaters, like Canada’s Kurt Browning, who was the World Champion from 1989-1991 and 1993. 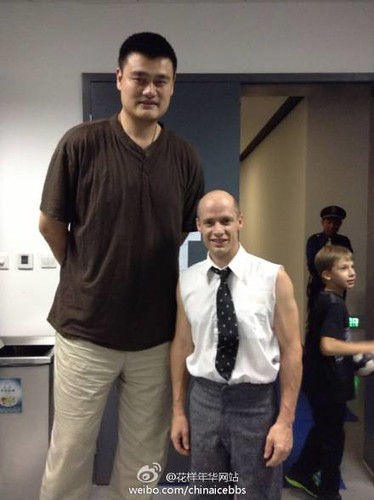 And checkout this photo of Yao with flamboyant American skater Johnny Weir. Click here for more photos of Yao with his family, Yao with some of the skaters, and scenes from the show.

This entry was posted on Thursday, June 20th, 2013 at 5:33 pm and is filed under China, Family & Marriage. You can follow any responses to this entry through the RSS 2.0 feed.